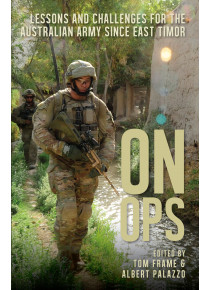 On Ops Book Lessons and Challenges for the Australian Army

On Ops: Lessons and Challenges for the Australian Army since East Timor edited By Tom Frame, Albert Palazzo

‘On Ops’ examines the massive transformation of the Australian Army which has taken place since troops were deployed to East Timor 1999. After decades of inactivity and the ‘long peace’ of the 1970s and 1980s the Army was stretched to the limit. The list of deployments during this period includes Rwanda, Cambodia, Somalia, Bougainville, East Timor, Afghanistan, Iraq and the Solomon Islands.﻿
Contributors to this book﻿ include John Howard and Peter Leahy as well as Craig Stockings, David Horner and an impressive array of military historians, academics, intelligence experts and ex and current Army members﻿.﻿

The book takes on the politico strategic assessments as well as investigating the Army's performance in these missions and campaigns.﻿