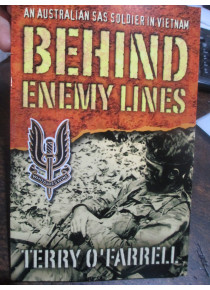 Terry O'Farrell's enlisted in the Australian Army when the war in Vietnam started gathering momentum. He become a member of 2 Squadron SAS in 1966 under Major Brian Wade AATTV.

On his first tour he arrived into Vietnam just after the 68 TET offensive. He completed two combat tours of Vietnam both as a SAS soldier and went on 40 patrols behind enemy lines as a forward scout, a platoon signaller and eventually as a patrol commander. He was wounded twice. Following the Vietnam War he remained in the Army rising to the rank of Major.

A highly detailed book with a lot of emphasis on the daily life and times of an SAS soldier on the hill at Nui Dat. This book would offer a pile of reminiscing to any veteran of the Vietnam War. Terry was one of the last Australians to go on patrol in Vietnam.

Terry relives the long tense stretches on patrol in the jungle, ears ever alert to the sounds of the surrounding terrain and being caught by surprise and sudden contact with the enemy.

He also entertains his readers with colourful tales of his experiences off the battlefield-the larrakin pranks during training, visits to Mama San and her girls, and the friendship and mutual trust that forms between soldiers...An absorbing, frank and humorous reflection, Behind Enemy Lines is a first-hand insight into the mind of a young SAS soldier