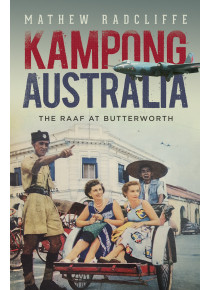 Life and times historical study of the RAAF base at Butterworth which was Australia’s largest and most enduring overseas military garrison in post-war Southeast Asia.

RAAF Butterworth operated for over 30 years, the surrounding area of Penang supported a large Australian community and thus this is reflected in the title of the book ' Kampong Australia '.

More than 50,000 Australian servicemen and their families were posted through the Penang region of Malaysia for two-year tours of duty at the Butterworth Base. The RAAF members and in many cases with their families lived full lives during their deployment, a bastion of Australianness in the midst of Malays, Chinese and Indians.

Would be a great book for those with a family history interest in the Butterworth Base.
Not to forget the appeal of the book to RAAF historians in that the release covers a little canvassed RAAF period.