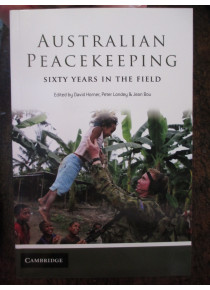 Peacekeeping has been a significant part of Australia's overseas military engagement since the end of the Second World War. Yet it is a part of the country's history that has been largely neglected until the 1990s, and even since then interest has been slow to develop.

In the last sixty years, between 30,000 and 40,000 Australian military personnel and police have served in more than 50 peacekeeping missions in at least 27 different conflicts. Covering the first Australian mission to Indonesia in 1947 and operations in East Timor, Bosnia and Rwanda among others, this book finally gives Australian peacekeeping its proper status

This insightful, engaging and superbly-edited volume approaches Australian peacekeeping from four angles: its history, its agencies, some personal reflections, and its future. Contributors discuss the distinction between peacekeeping and war-fighting, the importance of peacekeeping in terms of public policy, the problems of multinational command, and the specialist contributions of the military, civilian police, mine-clearers, weapons inspectors and diplomats.

The collection concludes with experts in the field - including Tim Ford, a former Military Advisor to the UN Secretary-General, and distinguished academic Ramesh Thakur - offering their perspectives on future directions for Australian peacekeeping. ﻿