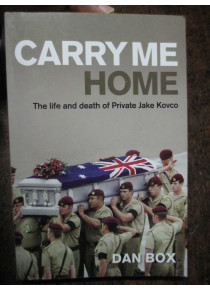 Carry Me Home  the Life and Death of Private Jake Kovco

Jacob Bruce "Jake" Kovco (25 September 1980 – 21 April 2006) was a private in the Australian Army who died while deployed to Iraq, fatally wounded by a single shot to the head from his own Browning 9mm sidearm. He was the first Australian soldier to die while deployed to the Middle East Area of Operations.

A military inquiry found Private Kovco accidentally shot himself while mishandling his pistol. This conclusion was disputed by his family and on 2 April 2008, a second inquest returned a similar verdict, finding that his death was "irresponsibly self-inflicted", and that when he pulled his gun's trigger he "disregarded the possible consequences of dange﻿