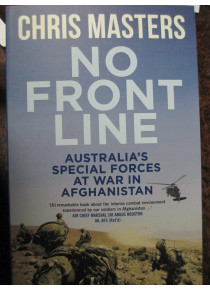 The soldiers of the SAS, the Commandos and Special Operations Engineer Regiment are Australia's Special Force's soldiers.

Their work is often secret, their bravery undeniable and for thirteen years they were at the forefront of Australia's longest war. Shunning acclaim, they are the Australian Defence Forces' brightest and best skilled.

In an extraordinary investigation undertaken over ten years, Chris Masters opens up the heart of Australia's Special Forces and their war in Afghanistan. He gives voice to the soldiers, he takes us to the centre of some of the fiercest combat Australia has ever experienced and provides the most intimate examination of what it is like to be a member of this country's elite fighting forces. But he also asks difficult questions that reveal controversial clouds hanging over our Special Operations mission in Afghanistan.﻿