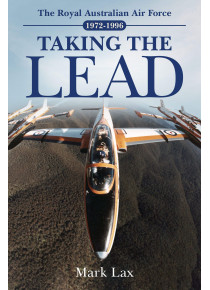 The third volume in the RAAF Official History collection.
* Extensively and meticulously researched over four years.
* Released to coincide with RAAF 99th Birthday.

As Australia withdrew from Vietnam in 1972, few in the Australian Defence Force, none the least those in the Royal Australian Air Force could foresee the immense change that would sweep across the Service.

New and emerging international relationships, changing Australian social attitudes, and a growing sense of defence self-reliance would all impact how the RAAF contributed to the application of air power in the defence of the nation and in supporting Australia’s wider national interests.

For the first time, Taking the Lead brings to the reader a comprehensive and authoritative study of how the RAAF matured over its third quarter century, how it met the challenges faced, and how it finally came of age, able to take the lead when asked.

By 1996, plans were in place such that the RAAF was well on the way to becoming the world’s first fifth generation air force, by making a remarkable transition.

This volume also dispels the myth that the RAAF did little in the latter part of the twentieth century but train. In fact, the RAAF was at the forefront of operations as wide afield as the Sub-Continent, the Middle East, Africa and South-East Asia. Then there was aid to the civil community as well as aid to those nations seeking help in wider Asia-Pacific region. Clever force restructuring for expeditionary operations amid the stress of downsizing by almost a third, meant that future operations in the twenty-first century were to be a success.

Taking the Lead is not just about aircraft, bases and flying. It considers the strategic environment of the era, the factors that affected personnel and training, how the RAAF’s force structure advanced and how the RAAF managed its successes and failures. For those seeking to learn more about their air force, then this book is essential reading. Taking the Lead covers this vital part of the RAAF’s unfolding narrative, and perfectly illustrates how the RAAF remained true to its Motto – Per Ardua ad Astra – Through Adversity to the Stars.