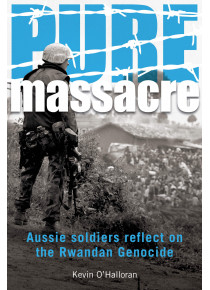 It was into this cauldron of death that a group of Australian peacekeepers, were sent to help alleviate the suffering and bring some order back into shattered lives. For this group of soldiers the daily horrors of their mission were to take on a even more sinister and sickening mantle when they were witness to another massacre a year after the genocide this time at the Kibeho Displaced Persons Camp.

On 22nd April 1995 in full view of the Australian peacekeepers, over 4,000 died in a hail of bullets and machete blades at the hands of the Rwandan Patriotic Army. Hamstrung by their UN peacekeeping rules-of-engagement the soldiers could do little to stop the killing. They could only watch the carnage and try, under the gaze of the trigger-happy killers to help the wounded.

Pure Massacre is a record of what happened during this peacekeeping mission. Kevin “Irish” O’Halloran, a Platoon
Sergeant at the time, stresses the weaknesses of the UN charter and what happens when “good men do nothing”. He pulls
together the perspectives of the Australian personnel who served in Rwanda at this time. Pure Massacre gives a new and personal voice to the Kibeho Massacre.