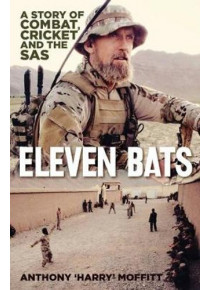 Eleven Bats a story of combat, cricket and the SAS

Eleven Bats A story of combat, cricket and the SAS By A. Moffitt

His decades of service and his multiple tours in East Timor, Iraq and Afghanistan made him one of the regiment's most experienced and recognised figures.

Moffitt recently retired from the Australian Defence Force after almost thirty years, most of which was spent with Australia's elite Special Air Service (SAS) Regiment as a Team Commander and Team Specialist. He has served in eleven active deployments, including being wounded in action in 2008.

The title alludes to an improvised game of cricket which was often the circuit-breaker Harry and his team needed after the tension of operations. ﻿