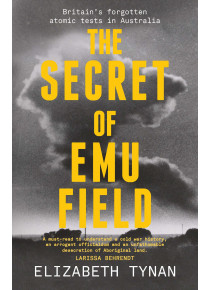 Emu Field is overshadowed by Maralinga, the larger and much more prominent British atomic test site about 193 kilometres to the south. But Emu Field has its own secrets, and the fact that it was largely forgotten makes it more intriguing.

Only at Emu Field in October 1953 did a terrifying black mist speed across the land after an atomic bomb detonation, bringing death and sickness to Aboriginal populations in its path. Emu Field was difficult and inaccessible. So why did the British go there at all, when they knew that they wouldn’t stay? What happened to the air force crew who flew through the atomic clouds?

And why is Emu Field considered the ‘Marie Celeste’ of atomic test sites, abandoned quickly after the expense and effort of setting it up?