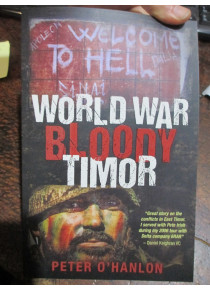 The author Peter O'Hanlon was a member of 2 RAR in Timor and later deployed in 2006 with 6 RAR.

Both deployments are covered in this book.

In September 1999, Australia deployed a brigade-sized combat element to East Timor as part of the UN sanctioned International Force – East Timor (INTERFET) that was deployed in order to restore law and order and end the widespread violence and destruction that had broken out following a referendum in August that had shown overwhelming support for independence from Indonesia. As a part of this deployment, the Australian force was charged with restoring peace and security and facilitating the provision of humanitarian assistance. 2 RAR was one of the first units deployed once the airfield at Dili had been secured.

The author wrote of his book:

My name is Peter O’Hanlon, but everyone in the military, from the lowest digger to the highest officer, has always called me ‘Irish’. You won’t see me, or the service men and women like me, featured in the latest blockbuster, but our service lives include drama, laughs and accounts of deep turmoil that are worth telling. I was a member of the Australian Army for 11 years and during my deployment as part of the INTERFET force, serviced three very impacting tours of East Timor.

What was it like, as a 19 year to land at the Dilli Airport in Australia’s largest deployment since Vietnam?

What are the little-known battles and obstacles that cause unseen scars through a deployment?

What are the impacts on re-integrating into the civilian community?

This is my story, an ordinary soldier; the juicy yarns, the laughs, the battles, the devastating lows, the soaring highs, the blood, sweat and tears we give in service every day. It will make you laugh and may make you cry. It’s the cold hard truth about the impact of a different type of war fought by many who deployed to Timor.