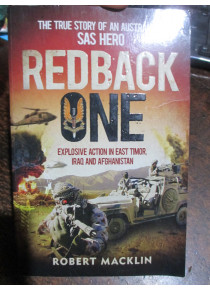 Redback One The True Story of an Australian SAS Hero

$16.00
Redback One The True Story of an Australian SAS Hero by Robert Macklin

This is what an SAS career is really like' AUSTRALIAN DEFENCE MAGAZINE Elite SAS Patrol Commander Stuart 'Nev' Bonner takes us inside the extraordinary and dangerous world of secret combat operations in this explosive, behind-the-scenes look at life inside the SAS.

A world where capture means torture or death, and every move is trained for with precision detail to bring elite soldiers to the very peak of fighting ability. In a career spanning twenty years, fourteen of them in the SAS, Bonner shares with us the inside story of being out in front - and often behind enemy lines. From patrolling the mountains of East Timor to covert operations in Bougainville and the Solomon Islands, from sweeping into the Iraqi desert ahead of invading US forces to cripple Saddam Hussein's communications to patrolling in war-torn Baghdad and being in the middle of the disastrous Operation Anaconda in Afghanistan - this is a no-holds-barred account of what it's like to live, eat and breathe SAS.