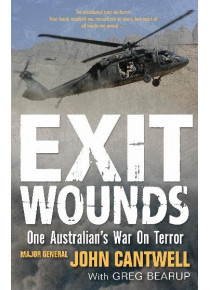 Exit Wounds: One Australian's War On Terror by J. Cantwell and G. Bearup

This war book is a rare account from a senior Australian Army Officer of operations and events in the Afghanistan War.

From Queensland, John Cantwell signed up to the army as a private and rose to the rank of Major General. He was on the front line in 1991 as Coalition forces fitted bulldozer blades to tanks and buried alive Iraqi troops in their trenches. He fought in Baghdad in 2006 and saw what a car bomb does to a marketplace crowded with women and children.

In 2010 he commanded the Australian forces in Afghanistan when ten of his soldiers were killed. He returned to Australia in 2011 to be considered for the job of chief of the Australian Army.

Instead, he ended up in a psychiatric hospital. Exit Wounds is the compassionate and deeply human account of one man’s tour of the War on Terror, the moving story of life on a modern battlefield: from the nightmare of cheating death in a minefield, to the poignancy of calling home while under rocket fire in Baghdad, to the utter despair of looking into the face of a dead soldier before sending him home to his mother. He has hidden his post traumatic stress disorder for decades, fearing it will affect his career.

Australia has been at war for the past twenty years and yet there has been no stand-out account from these conflicts—Exit Wounds is it. Raw, candid and eye-opening, no one who reads this book will be unmoved, nor forget its imagery or words.

This is my story, but it is also the story of thousands of Australian veterans from Iraq, East Timor, Afghanistan and other conflicts who bare similar emotional scars. This is what becomes of those men and women we send off to war, pay little attention to, then forget once they are home.’﻿