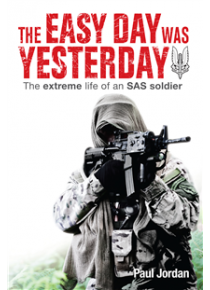 ' The Easy Day was Yesterday The extreme life of an SAS Soldier' by Paul Jordan﻿ : new book

My SAS selection course instructor, was as hard as nails. At the start of each day’s training, he would say, ‘Men, the easy day was yesterday.’ With that, we’d all let out a silent sigh contemplating the tortures that lay ahead of us.

From his cage in a putrid, overcrowded Indian gaol, Paul Jordan reflects on a life lived on the edge and curses the miscalculation that robbed him of his freedom. His childhood, marred by the loss of his father and brother, produce a young man hell bent on being the best of the best — an ambition he achieves by being selected to join the elite SAS. He survives the gut-wrenching training regime, deployment to the jungles of Asia and the horrors of genocide in Rwanda before leaving the army to embark on a career as a security adviser.

His new life sees him pursuing criminals and gun-toting bandits in Papua New Guinea and the Solomons, protecting CNN newsmen as the US 7th Cavalry storms into Baghdad with the outbreak of the Iraq War, and facing death on a massive scale as he accompanies reporters into the devastated Indonesian town of Banda Aceh, flattened by the Boxing Day tsunami.

During his 24 days in an Indian gaol, Paul Jordan discovers that friendship and human dignity somehow survive the filth and deprivation. This is a personal account of a tough, hardened fighter who suddenly finds himself totally dependent on others for his every need.

The Easy Day was Yesterday is fast paced, brutally honest and raw, but laced with dark humour. The core of Paul Jordan’s eventful life, however, is the strength of his bonds with family and friends and the ability of the human spirit to survive even the direst adversity.