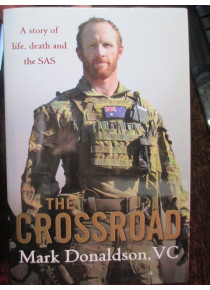 The Crossroad A Story of Life, Death and the SAS﻿by M.Donaldson : new book

SAS Trooper Donaldson was awarded the Victoria Cross for feats of gallantry performed on the 2 September 2008. He was a member of Australian Army's elite Special Air Service Regiment patrolling in an eastern Afghanistan﻿ valley during ﻿Operation Slipper﻿ which was part of the Battle of Khaz Oruzgan﻿ . During an attack he exposed himself to the enemy in order to protect injured troops and then under direct enemy fire rescued an interpreter.

Australian SAS Trooper Mark Donaldson﻿ become the first soldier to be awarded the Victoria Cross for Australia.  He was the first to be awarded our highest bravery distinction﻿ since Kieth Payne in 1969. ﻿
This is Donaldson's autobiography of his life but concentrates on his military career﻿. Especially during the Afghanistan War and the deeds performed by him on the 2nd September 2008 which earned him the VC.