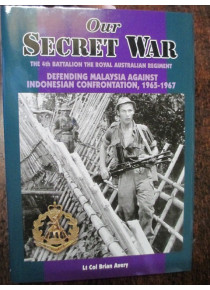 Our Secret War. The 4th Battalion The Royal Australian Regiment Defending Malaysia Against Indonesian Confrontation 1965-1967 by Lt Col B. Avery

The author Brian Avery, joined 4 RAR in 1964 and served with the Battalion in Malaysia and Borneo as a rifle platoon commander. Our Secret War provides an intriguing account of the clandestine Australian operations carried out in Indonesian Borneo (Kalimantan) during the Confrontation / Malaysian emergency.

This is the story of the 4th Battalion, the Royal Australian Regiment, raised at Woodside in 1964, and sent to Malaysia in 1965 as part of Australia's contribution to the defence of the region. The military commitment came at a crucial time due to the deteriorating political climate in much of southeast Asia.
Each operation that was carried out by 4 RAR is well documented and detailed. Supported by numerous﻿ photographs and Appendix 3 lists a roll of all 4 RAR members who served in Sarawak from April to September 1966﻿.

An important﻿ historical record,﻿ to the 4th Battalion﻿ and a little remembered conflict during the period from 1965 to 1967 when Australia defended Malaysia against the Indonesian confrontation.﻿