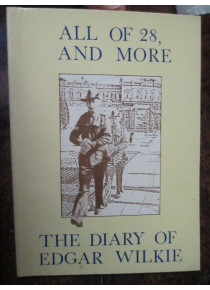 All of 28 and More The Diary of Edgar Wilkie by W Wilkie : used book

War book printed 1987 "DIARY OF EDGAR WILKIE" written by W. Wilkie. Bill Wilkie was the Father of Edgar. Edgar joined the 2nd AIF and was one of the Australian soldiers who travelled north to defend Singapore.
At the Fall of Singapore he become a POW at Changi. From Changi he was sent to Nippon Japan with J Force where he died (July 1945) from working deep underground in coal mines. The actual book is called ' ALL of 28 and more ' this was the phrase that Egar last wrote in the diary before his death. Medal and family researchers will find this book a great help if they are trying to locate details or experiences which would have happened to other soldiers in Japan.
There is a list of Edgar's co slave workers in the book.