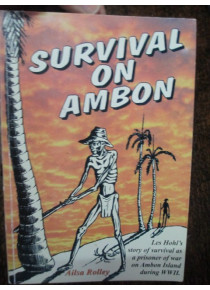 Survival on Ambon by A. Rolley

For one week in January 1942, Gull Force fought the advancing Japanese. They then endured 3.5 years as POW at the hands of the cruel Japanese.

Tells the story of Les Hohl and his experiences as a POW on Ambon Island. He was a sapper with the 2/11th Field Company, Royal Australian Engineers. Hohl was also member of Gull Force. Book also includes details of his service before he was captured.