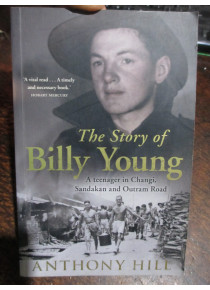 The story of BILLY YOUNG A teenager in Changi, Sandakan and Outram

The story of BILLY YOUNG, A teenager in Changi, Sandakan and Outram Road By A Hill

In July 1941, Billy Young was only 15 years old, he was an orphan, homeless, broke and angry. The Australian Army was a way out of his situation. Little did he realise the hell that awaited. He joined the Army and was allotted to C Company 2 29th Battalion. He went without much training to defend Singapore. He was present with the 2 29th Battalion during fighting around Choa Chu Kang Road just prior to the Fall Of Singapore. Upon the Fall of Singapore he was taken POW. He was imprisoned at Changi, then Sandakan airfield group and Outram Road.
This is his story.