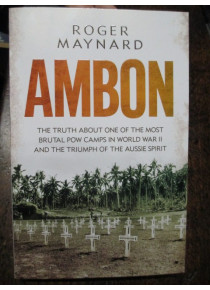 Australian story of the POW at Ambon Camp WW2

Ambon The Truth About One of the Most Brutal POW Camps in World War II by R. Maynard

Ambon is an island located just north of Darwin. In December 1941, the Australian Army sent a convoy to the island carrying near 1100 soldiers of "Gull Force". Their primary aim was to defend the island from the advancing Japanese forces.  Ambon had an airstrip and it was feared (correctly) that it would be used in air attacks against Darwin. The force consisted of the 2/21st Battalion from the Australian 8th Division, as well as some divisional artillery and support units.

Gull Force were out numbered in men, equipment and war experience. In February, 1942, the island fell to the Japanese army and the Allied forces defending it were captured. Over a thousand of these soldiers were Australian. In 1945 at the end of WW2, only about 300 of them had survived.

As pows they were subjected to some of the most sadistic brutality of all WW2 POW camps. Starvation, diseases such as malaria, all took their toll but there was much savagery by Japanese guards including so called medical 'experiments'. ﻿
The author Roger Maynard who has a special interest in Ambon, researched the book from the historical records and several living survivors of the Camp.
The detailed text is supported by many photos.