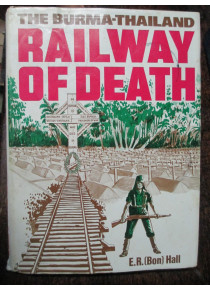 THE BURMA-THAILAND RAILWAY OF DEATH by E.R. 'Bon' Hall

Bon Hall, was a RAAF signals officer during WW2. He was stationed at the West Java Fighter Section and was captured after the capitulation of Java.
In 1942, then a POW he was sent to Burma to work on the death railway, finishing the war in Thailand. Supported by diaries, in this account of the construction of the Burma - Thailand railway, the writer gives a graphic account of the diseases and conditions suffered by the workers both in camps and during the working day.

The author concludes by describing the railway today and discusses how the ordeal of building the railway affected his own life and the lives of others. ﻿