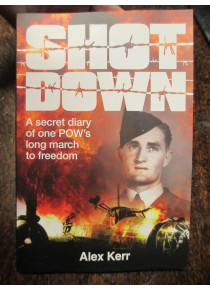 Alex Kerr joined the RAAF as a pilot he attended the Empire Training Scheme in Canada. Then he transferred to Bomber Command flying Wellington Bombers. He was posted to 115 RAF Squadron flying out of Marham Norfolk.

Alex’s twin-engined ﻿Wellington bomber, was shot down over Germany in 1941. At first hospitalised with hopes of repatriation, he unexpectedly found himself a prisoner in a German POW camp. Throughout those trying four years he was held captive, Alex kept a secret diary. This book reproduces his diary entries in a fascinating account of all aspects of life in a wartime prison.

He describes being part of the infamous ‘Long March’ during which he and his comrades were strafed by Allied aircraft; 60 POWs were killed and 100 wounded. Alex escaped the march with a mate, passing through the front lines between the British and German forces to commandeer a German mayor’s car and drive back to Brussels to take the next aircraft to freedom.

Alex’s charm and optimistic outlook will buoy the reader throughout, and the camaraderie between he and his captive comrades is always entertaining. This is an authentic World War II adventure — from being shot out of the sky, to incarceration and the ultimate triumph of escape and the end of the war.