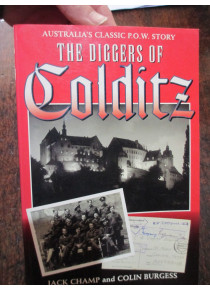 Diggers of Colditz by J Champ and C Burgess

Colditz was Germany's escape-proof castle prison where hundreds of the most determined and resourceful prisoners of WW II tirelessly carried out an unending campaign to achieve the seemingly impossible - freedom!

On 23 June 1943 Lieutenant Jack Champ of the 16 Battalion 2AIF was marched into the German prisoner-of-war camp designated Oflag IVC, these days better known as Colditz Castle.

By the end of the war twenty Australians had spent time in Colditz, and this book looks at life in the ancient castle prison specifically from their point of view.

Colditz was a very special camp at which the guards outnumbered the prisoners, and the castle was floodlit at night. Initially the Germans boasted that Colditz Castle was escape-proof, but they were wrong. By the end of the war there had been more escapes from Colditz than from any other prison or comparable size during both World wars.