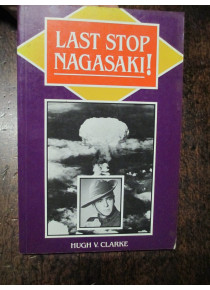 'Last Stop Nagasaki! ' by H. Clarke . Hugh Clarke was a Brisbane cadet surveyor when he enlisted in the AIF at age 20. He become a member of the 2nd 10th Field Regiment﻿. After the fall of Singapore﻿ he was a POW of the Japanese.He was taken to Japan in 1944 to work on ships and was located at Fukuoka Camp 2 located in Nagasaki Bay.﻿

Many of the POWs at this camp had also been brought from Timor and 2nd 40th Battalion.﻿  The story of the Australian prisoners of war POW who survived the Nagasaki atomic bombing. Moves between autobiography, recollections from other prisoners and the author's research.