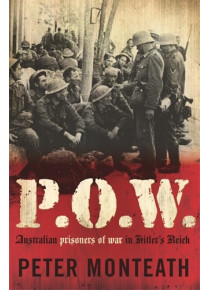 Australians from every branch of our armed forces in World War ll found themselves captives in Hitler's notorious prisoner of war camps. Whether bomber crews and fighter pilots shot down over Europe, soldiers taken in North Africa and the disastrous Greek and Cretan campaigns, or even merchant seaman captured half a world away, they were to see out the war in the heart of Hitler's Europe, their fate intimately connected to the fortunes of the Reich.

Most were forced to labour in factories, down mines or on the land – often in conditions of enormous privation and hardship. All suffered from shortages, overcrowding and the mental strain of imprisonment. Some tried to escape – a few successfully, a few paying with their lives.

The experiences of Australian prisoners of war in Germany have long been overshadowed by the horrors of Japanese imprisonment, yet their stories of courage, stoicism, suffering and endurance deserve to be told. Peter Monteath's fascinating narrative history of these prisoners of war is exhaustively researched, and compelling in its detailed evocation.