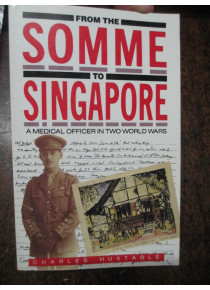 From the Somme to Singapore  a Medical Officer in Two World Wars ' By C Huxtable : used book

From the Somme to Singapore : a medical officer in two world wars ' By C Huxtable. Published by Kenthurst, N.S.W. Kangaroo Press 1987.

The Author, an Australian, was studing in England when WW1 started, he served as a Medical Officer with the Lancashire Fusiliers in early WW1 before joining the AIF in 1918. He was a Doctor at frontline hospitals in France and had stints back England.
After the first World War he returned to Australia and worked at hospitals like Prince of Wales in Sydney and Southport in Queensland. He married in 1928 and had 4 children before the onset of WW2.

In 1941, he again volunteered this time for WW2 service joining the 2nd AIF. He was allotted to the 13 Australian General Hospital and was transferred with that medical unit to Singapore. After only 5 months in Singapore he became a prisoner of the Japanese. During his 3 and half years of imprisonment he worked tirelessly in the Changi Australian and British POW hospitals. For the greater part of his captivity he was able to keep a secret diary and this together with personal recollections formed the basis of this book.

Provides an account of daily life and conditions in frontline hospitals during both World Wars. About two thirds of the book relates to his time as a POW in Singapore.