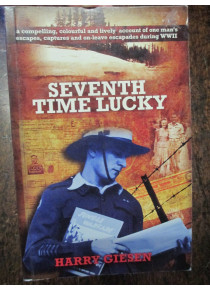 Harry Giesen tells his story as ﻿a member of 2 AIF 1 Battalion. He saw active service in the Middle East, Bardia and Tobruk until the Greece Crete campaign where he was captured on the island of Crete. The book's title comes from the fact that he tried to escape 6 times but was then successful on the 7th. He was able to reach friendly lines and finally made it back to Australia. ﻿

This WW2 memoir is a compelling, colourful and lively account of his many escapes, captures and on-leave escapades in Europe between 1940 and 1945. His thoroughly engaging story involves universal themes of love, mateship, larrikinism and endurance while at the same time highlighting the futility and misery of war. From the moment he enlists in the 2nd AIF at the age of 19, to his sad and highly emotionally-charged homecoming to Sydney, Harry commands his readers accompany him on this intensely personal journey. ﻿