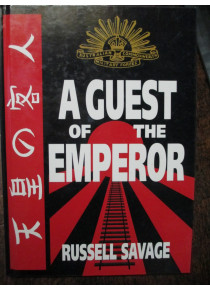 A GUEST OF THE EMPEROR by R. Savage

A GUEST OF THE EMPEROR '. written by R. Savage . Savage was a member AIF 2/10th Field Regiment surrended at the Fall of Singapore then POW Thai Burma Railway later sent to Japan . Highly readable account of the experiences of a youthful gunner during his A.I.F. years, chiefly of the time spent by him, following the fall of Singapore, as a prisoner of war. This book is a riveting narrative of "guts" and determination through to civilian achievement.
Savage went to work on the Burma Railway at Tavoy. After completing that railway, his workgroup was sent to Yokohama Japan Sakata camp.
He was aboard the Rakuyo Maru and Kibibi Maru.