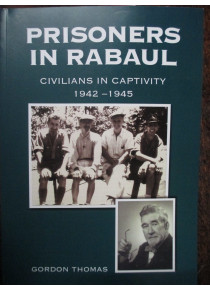 Within hours of the Japanese invasion of Rabaul in 1942, Gordon Thomas and a party of civilians surrendered themselves and became prisoners. Thomas and several others were put to work for the enemy, operating Rabaul's commercial freezer and ice plant.

Most of the other civilian and army men imprisoned in the town were doomed when they were put on board the Japanese ship Montevideo Maru. They were sent to Japan but before the ship arrived on 1 July it was torpedoed by a US submarine off the coast of the Philippines with the loss of 1186 lives.
The four men at the freezer were left behind and spent the next three years under Japanese rule - but surprisingly not in a camp. They were under open arrest in a building near their work but were not free to roam.

This account also tells how the 'freezer crew' escaped death on many occasion during Allied bombing of Rabaul.﻿﻿

This book is a window into Rabaul during the bomb blasted years of 1942 to 1945. A rare view of Japanese soldiers in their own backyard during the war years.﻿