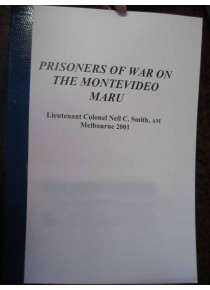 Nominal Roll﻿ Prisoners of War On The Montevideo Maru WW2﻿﻿

Nominal Roll﻿ Of﻿ The Prisoners of War On The Montevideo Maru WW2﻿
This Nominal Roll purports to list all Australian personnel from the Army, Navy and Air Force who were prisoners of war from Rabaul, New Britain and who were on the Japanese transport ship﻿ Montevideo Maru﻿. Montevideo Maru﻿ was sunk by the US submarine Sturgeon off the Philippines on the 1 July 1942.
Many of the Australian POWs were part of Lark Force of which the majority were members of the 22nd Infantry Battalion.
This list provides the rank, serial number, surname, Christian name or initials and the unit.
Very happy to check the list for a individuals name before purchasing the booklet.﻿