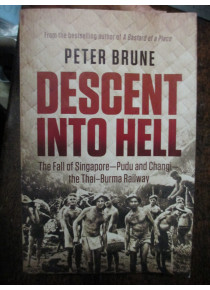 Australian POW Descent into Hell The Fall of Singapore

Descent into Hell The Fall of Singapore Pudu and Changi and the Thai Burma Railway By P. Brune

Descent into Hell is a scrupulously researched and groundbreaking account of one of the most traumatic calamities in Australian history - the Malayan Campaign, the Fall of Singapore and the subsequent horrors of the Thai-Burma Railway.

Sorting through the myths and legends of the war, Peter Brune goes to the heart of the Australian experience. He describes the shambolic planning by the British in Singapore and the failures and incompetence of some of the Australian command. He debunks the claims about Australian deserters in Singapore, and we learn of the black market in Changi and the beatings, torture and murder on the Thai-Burma Railway.

Here too are stories of the war's many heroes and villains: of officers who looked after their men and optimised their chances of survival, and others who looked after themselves at their men's expense; the heroes of battle who became ineffectual and lost in the camps and on the Railway, and the least liked and least respected battlefield officers who came to be great leaders. And then there are countless acts of kindness and decency performed by one POW for another in the most cruel of circumstances.

Impressive, compelling and rich in human spirit, Descent into Hell is an unprecedented chronicle by one of Australia's finest military historians.﻿