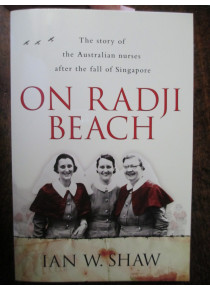 On Radji Beach The Story of the Australian Nurses POW

This is the story of 65 Australian Army nurses who boarded a coastal freighter the Vyner Brooke in Singapore on 12 February 1942.

It is one of the most famous Australian﻿ stories to come out of World War II and several documentaries have been made about the doomed voyage and subsequent massacre of the nurses on Radji Beach by Japanese Army.

It is well-known that there was only one survivor of the massacre that being Vivian Bullwinkel.

A story of courageous women triumphing over adversity in Japanese internment camps, starvation and disease as POWs over the next three and half years.

Biographies have also been written about Vivian Bullwinkel and Wilma Oram. Several were involved in contributing to a fictionalised account of the experiences of the women prisoners of the Japanese, the acclaimed film Paradise Road