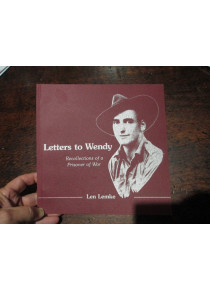 Letters to Wendy: Recollections of a Prisoner of War. by L. LEMKE

Lemke, joined the  Australian Army 2nd 29th Battalion on the 25 July 1940, he landed in Singapore on the 9th August 1941 with D Company 2/29 Battalion. After a short time, he went with a small group of 29th Battalion men to learn the ropes and train with the Argyle and Southern Highlanders in the north of Singapore. Upon his return, he transferred to the Australian Motor Ambulance Corps - MAC.

After the Fall of Singapore, he became a POW, the majority﻿ of the book relates his experiences at Changi and on the Thai-Burma Railway.
His letters were written to his daughter, in 1993 giving highly detailed accounts of his incarceration during World War II. Highly readable, with many names of mates being mentioned. ﻿