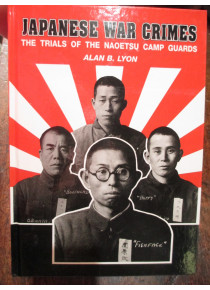 Japanese War Crimes The Trials of the Naoetsu Camp Guards

Japanese War Crimes provides a full account of the war crimes trial and covers what transpired when the guards from the  Naoetsu Camp 4-B in Japan were tried. Naoetsu Camp, 300 Australian prisoners of war were interned and 60 of them died because of ill treatment between 1943 and 1944.  Eight guards were subsequently hanged for their crimes.

Importantly, the book concludes with an honour roll and names of all prisoners between 1943 in 1944.