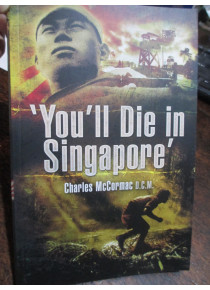 The book's author, Charles McCormac was born in England, but lived in Australia before joining the RAF for WW2 service. He was posted to Singapore and after the surrender became a POW.
He and 16 other Australian and British prisoners, broke out of Pasir Panjang POW Camp (Singapore) and began an epic 4000 km escape from the island of Singapore, through the jungles of Indonesia to Australia.

Acknowledged to be one of the most compelling true accounts of the various documented escapes during or after the 1942 Fall of Singapore.

Only McCormac and an Australian survived the dramatic five-month escape from Singapore to Australia. He first published his account in 1954 and this is a new reprint of that edition.

For his WW2 service,  he was awarded the Distinguished Conduct Medal and died in 1985 at the age of 70.