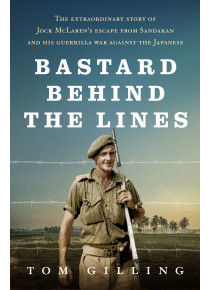 Bastard Behind the Lines Escape from Sandakan POW

Robert Kerr “Jock” McLaren MC & Bar (born 1902 – Died 3 March 1956) was a decorated Australian Army officer, he become famous for his action in guerrilla operations against the Japanese. After the war his exploits were published in the 1957 book titled, One Man War - The Jock McLaren Story.

Drawing on Allied and Japanese wartime documents, Bastard Behind the Lines brings the story of a courageous Australian Z Special Commando and POW vividly to life and throws further light on what happened at the Sandakan POW Camp.

Scottish-born but a Queenslander to the bone, Jock McLaren was a true Australian hero. As a prisoner he escaped twice, first from Changi and later from the infamous Sandakan POW camp in Borneo. After paddling a dugout canoe across open sea, he fought for two years with American-led Filipino guerrillas, his exploits so audacious the Japanese put a price on his head.

At the helm of his 26-foot whaleboat, the Bastard, McLaren sailed brazenly into enemy-held harbours, wreaking havoc with his mortar and machine guns before heading back out to sea. In early 1945 he joined Australia's secretive Z Special Unit, parachuting into Borneo to carry out reconnaissance and organise anti-Japanese resistance ahead of Allied landings. He cheated death on numerous occasions and saved his own life by removing his appendix without anaesthetic, using 'two large dessert spoons' and a razor blade.