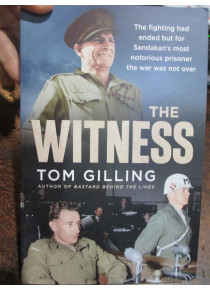 $34.00
The Witness The fighting had ended but for Sandakan's most notorious prisoner the war was not over by T Gilling

During his three years in the infamous Sandakan POW camp, Sticpewich had seen hundreds of fellow prisoners die of starvation, sickness and overwork. Others were shot or bayoneted to death by Japanese guards on forced marches through the Borneo jungle. Of more than 2400 Allied prisoners at Sandakan at the start of 1945, only six survived. It was Sticpewich's meticulous evidence that sent Sandakan's commandant and his murderous henchmen to the gallows.

There were few eyewitness as most were killed.