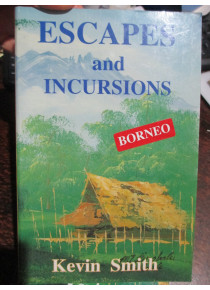 Escapes & Incursions tells an authentic and close details the stories of the perilous adventures and dreadful ordeals of ninety attempted escapes, some successful, by desperate Australian prisoners of war in Borneo 1942 to 1945.It tells also of the hazards confronted by small teams of intrepid Australian commandoes of “Z” Special Unit in enemy-occupied Sabah, revealing their achievements during lonely jungle patrols 1943 to 1945.

Interwoven through the many amazing tales is evidence of the courageous assistance given by the local people of the towns and Kampongs.

There are fascinating stories here never before told in print, retrieved from archival files once classified Top Secret or glimpsed clearly through the mists of memories and the mountains.

From late 1943 members of Z Special Unit were in the north Borneo on reconnaissance operations PYTHON and then AGAS, based within 140 and 70 km of Sandakan. The lethargic incompetence among the secret planners of a rescue mission led to its abandonment. This "Kingfisher" operation would have been carried out by the highly trained first Australian Parachute Battalion.