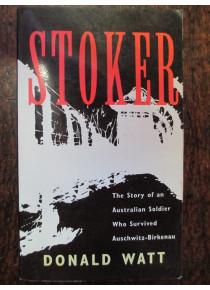 STOKER " by D Watt. The author was a member of 2 AIF 7th Battalion D Company. The Australian story of a remarkable Digger, Don Watt who took part in Battles in North Africa Greece and Crete. He was captured at the Battle of Crete and was sent to Germany where he successfully escaped only to be recaptured near the Swiss Border. As punishment he was sent to the predominately Jewish death camps at Auschwitz Birkennau.