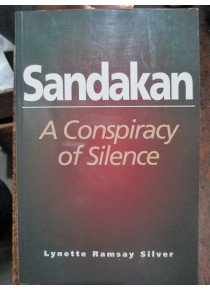 SANDAKAN: A Conspiracy of Silence By RAMSAY SILVER


“It is August 1945 and the war is over. As the Western world rejoices, deep in the jungles of British North Borneo, a small number of Australian and British prisoners are massacred. Of the 2434 prisoners incarcerated by the Japanese at Sandakan POW Camp, only six, all escapees, have survived. The POWs, sent from Singapore in 1942-43 to work on airfield construction, endured frequent beatings and were subjected to other, more diabolical punishment. Sustained only by an inadequate and ever-diminishing rice ration and with little medical attention, many died of malnutrition, maltreatment and disease. In 1945, in response to an order from the Japanese High command that no prisoners were to survive the war, those still able to walk were sent to a series of death marches into the interior. Anyone left behind were systematically starved to death or massacred. In late 1944 the Allies, aware that POWs were being “eliminated”, had evolved a plan for their rescue - a rescue which, after months of bungling, was finally cancelled in April, 1945, in the erroneous belief the camp had been evacuated. Gross incompetence and faulty intelligence were to blame for the failed rescue attempt. When it was realised that mistakes and stupidity were responsible for the deaths of hundreds of men, those at the highest level shifted the blame to others, before embarking upon a policy of wilful and deliberate suppression. Desperate to obtain information, grieving relatives wrote to newspapers, begging for information and asking the reason for the secrecy. “The story of the greatest tragedy in Australian military history remains to be written”, wrote one, in 1946. “Who will undertake the task?” Lynnette Ramsay Silver, through painstaking research and interviews with survivors, as well as a study of Japanese records, has pieced together a detailed and highly readable account of the lives and ultimate fate of Sandakan’s POWs. She tells a totally absorbing and horrifying tale, not only of the prisoners, but the reasons why they, and their story became World War 2’s most deadly secret.
Has a Roll naming 1787 Australians who were POW at the camps.