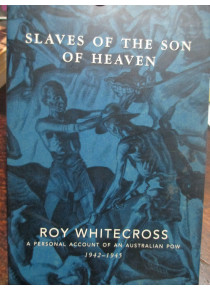 SLAVES OF THE SON OF HEAVEN Australian POW Story

SLAVES OF THE SON OF HEAVEN '. by R Whitecross

' SLAVES OF THE SON OF HEAVEN ' written by Roy Whitecross ex Australian POW. During the Fall of Singapore he was part of the last group of 2/19 2/29 Battalion troops surrounded by Japanese at Yong Peng. A personal account of the Japanese Prisoner of War camps, told starkly includes: Changi and Tavoy , Burma, the Burma -Thailand Railway, and Japan itself where the author laboured for nine months in an under-ground coal mine.

Whitecross risked his life to keep his diary, in 1944 before proceeding to Japan all men were searched by Kempeitai the Japanese military police, and Whitecross didn't have any choice but to hide and leave his scraps of diary paper in buried tins etc. When the war ended, Eric Hirsch, a man who helped to hide it, returned to the camp and dug up the diary. In Japan Whitecross and his friend Maurice Barkley were determined to write a book and kept notes of their observations and accounts of their friends. Those had to be destroyed as they were too much risk.

The book is not so common is detailed with pics