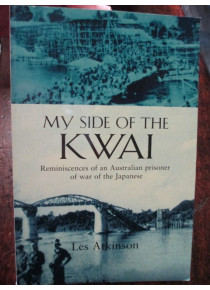 My Side of the Kwai Reminiscences Australian Prisoner of War of the Japanese by L Atkinson.﻿

My Side of the Kwai Reminiscences of Australian prisoner of war of the Japanese by Les Atkinson. The author was a veteran who went to Singapore as despatch motorcycle rider. He was allotted to the signaller section of the 2/15th Artillery Field Regiment. The Regiment took part in the defence of the Malaysian peninsular at Segamat.

At the Fall of Singapore he become a POW and worked on the Thai Burma Railway as part of "F" Force. He worked at the Kanburi until December 1943 after which they returned to Changi.