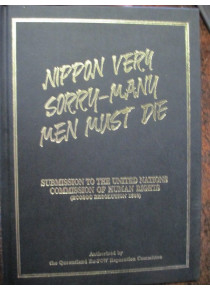 In 1990 the﻿ Queensland Ex POW Reparations Committee, of the Queensland Ex Prisoners of War Association, prepared a comprehensive and factual submission to The United Nations Commission on Human Rights claiming reparations from the Japanese via the United Nations﻿.﻿
Between 1942 and 1945, 22,000 Australian service personnel were prisoners of war of the Imperial Japanese Army. Over 7000 of these men and women died while they were captives of the Japanese. Many have since died as a result of their prisoner of war experience.

A highly interesting book which was put together by surviving POWs in Queensland Australia. It contains specific examples of POW human rights violations of these men between 1942 in 1945. Most of the major POW locations are mentioned the Burma Siam Railway, where there is a very graphic account amongst others, of how much space was allotted to each man in the holds of transport ships.

Major Kevin Fagan AA MC recalled," the worst experience I had was the job of choosing 100 of the survivors of a cholera epidemic to go further up into Thailand to a place called Konkoita to help with a railway cutting was behind schedule. There were about 300 of us left out of 600. From that group none of whom were well, all of whom had malaria, were malnourished, some of them shivering on parade, dressed in a laplap, rarely any boots, I had to choose 100 men to march another hundred miles into the unknown, to worse and not to better. I never saw any of those men again."﻿

Violations while men were held at Outram Road Jail.
Colonel Albert Coates offered a submission about the care of men as POWs," Higgins was worried because some of the men with penetrating ulcers of the legs were dying of haemorrhage. The ulcerating process was eating into the main artery and the poor fellows were bleeding to death. Under my direction he made an attempt to tie the artery in one case, but was unsuccessful. It became obvious to me that amputation was the only option which could save lives of the worst affected."
Colonel Coates testified that he amputated 120 limbs at Kilo 55 camp hospital during 1943.﻿