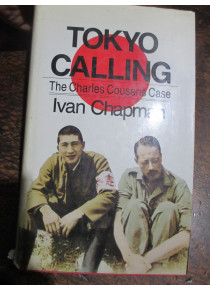 $25.00
Tokyo Calling The Charles Cousens Case by I Chapman

Major Charles Cousens was a member of 2/19th Battalion taken POW at the Fall of Singapore. The Japanese learned that he had been one of Australia's most popular radio announcers before the war. So he was put to work on Radio Tokyo. After the war he was charged with treason for his collaboration in delivering Japanese propaganda over the air waves .