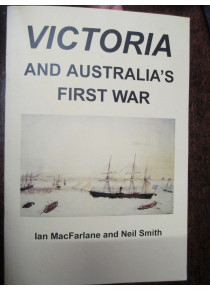 Victoria and Australia's First War﻿ by I MacFarlane and N Smith

History of the Sloop Victoria and the Maori Taranaki War.  ﻿The First Taranaki War was an armed conflict over land ownership that took place between Māori and the New Zealand Government in the Taranaki district of New Zealand's North Island from March 1860 to March 1861.﻿

In 1860, The Victoria was sent to fight in the war and became the first Australian unit to officially fight overseas. Has a bio nominal roll of Crew of the Victoria.