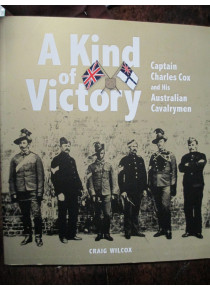 A Kind of Victory Book about Captain Cox & NSW Lancers

A KIND OF VICTORY: CAPTAIN CHARLES COX AND HIS AUSTRALIAN CAVALRYMEN By C. Wilcox

The author Craig Wilcox focuses on the life and times of a young Australian militia officer, Charles Cox. Cox and a squadron of the NSW Lancers went to Britain in early 1899 to train with the British Army.

Late in that year the Boer War begun and the Squadron went on to serve in that war. Has many historical references about the earlier times of the NSW Lancers for example the contingent that was sent to Sudan in 1885.

The book is illustrated with many impressive music sheets of those times.