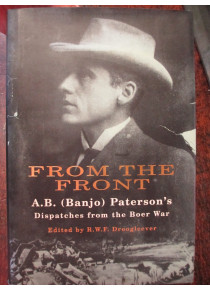 FROM THE FRONT edited by R.W.F. Droogleever.

FROM THE FRONT edited by R.W.F. Droogleever.
In 1899, Banjo Paterson, already a literary celebrity after the publication of The Man from Snowy River, left Australia for South Africa to cover the Boer War as a special correspondent for the Sydney Morning Herald and the Melbourne Argus.

His dispatches, often written from the battle front itself, have been called the best descriptive writing of his career. "Paterson was not content simply to record the progress of the war - he was shot at, went behind the Boer lines with the Medical Corps, spoke to Boer farmers, prisoners of war and respected figures who supported the Boer cause. He rubbed shoulders with noted personages of the day, such as the Duke of Teck, and Rudyard Kipling, but was equally at home in the company of Private Harrison, the mule-whaker. "From it all came a remarkable record of the campaign. Whether he is recounting the fear and exhilaration of battle or revelling in the absurdities he saw around him, Paterson's letters are as enthralling and exquisitely written as works for which he is best known. "Published for the first time as a single collection,

From the Front contains Paterson's dispatches, carefully annotated, and is illustrated with contemporary maps, drawings and photographs. It gives an extraordinary insight into Australia's first war and is further testament to the talent of one of our best-loved writers. This collection of more than seventy-five Banjo Paterson letters plus memorabilia covers his nine-month period as a war correspondent. They commence at his arrival off the South African coast at the end of November 1899 and finish at the surrender of Boer General Martinus Prinsloo and 4000 of his men at the Brandwater Basin on 30 July 1900. Shortly after this he was on his way home, arriving in Adelaide on 6 September 1900.
Good one for medal or genealogy research !