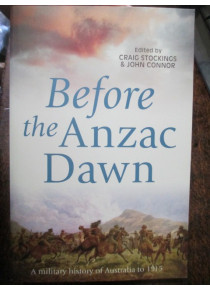 Before the Anzac Dawn: A military history of Australia before 1915 WW1

Before the Anzac Dawn: A military history of Australia before 1915 edited by Craig Stockings, John Connor

"If you think Australian military history started on the shores of Gallipoli,
this book will change your mind."﻿

The book is suitably titled Before Anzac Dawn as it explores the military battles that Australia took part in before Gallipoli. These include the aboriginal warfare, the Redcoats (British soldiers ) who guarded the colonies but engaged in turmoil with the locals - Eureka Stockade.

The Australians who took part in the indigenous wars in New Zealand, a chapter about the rifle clubs and cadet system in Australia before WW1. Chapters on the Sudan and Boer War in Africa.

The book ends with a chapter about the capture of the German New Guinea by the ANMEF at the beginning of World War I.

Written by a collection of well known Australian military authors including Peter Stanley and Craig Wilcox.﻿