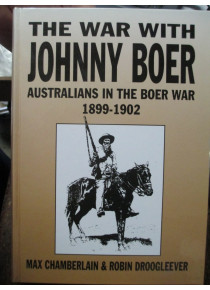 The War With Johnny Boer Australians in the Boer War

The War with Johnny Boer brings together Australian eye-witness accounts of the Anglo-Boer War between October 1899 and May 1902.

This is a scarce and sought after book about the Australian contingents operations during the Boer War. It has an extremely detailed narrative supported with numerous maps, photos and drawings. Each contribution has a wonderful story to tell and fits effectively into descriptions of the various battles and actions of the war.

There was no censorship of letters in those days, 'which means that this is not a sanitised account of the fighting. As the war unfolds, the honest nature of the writing gives a graphic coverage of Australian actions.

Traditionally, writers have avoided the guerrilla phase of the war from July 1900 to May 1902 and only superficial accounts have been published. The Editors of Johnny Boer have ensured that the guerrilla actions have been given more detailed exposure. As well as military enthusiasts, this book should appeal to history students, genealogists and medal collectors.

Readers will find in this account of the Boer War an emerging Australian spirit that, a generation later, became famous on the cliffs of Gallipoli. A valuable index, comprehensive appendices and cross-references of people, units and events make this a valuable research tool.