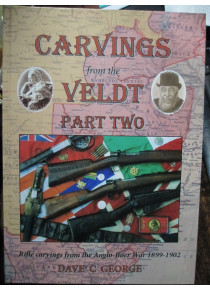 Carvings from the Veldt Part Two - by D. George

Carvings from the Veldt Book Two is a remarkable volume of not only rifle carvings but many relics and mementos from the Boer War. At Books on War, we thought that Book 1 was extraordinary but Book 2 is quite staggering with its pictorial and historical significance.
If you have any interest in the Boer War or military history books, then this book needs to be sitting on your shelf.﻿ From a collectors point of view﻿, it's one of those books, that will be sought after for ever more.﻿

Description from the Book release.

Exceptional interest in Part One of ‘Carvings from the Veldt’ has uncovered many additional carved weapons and much encouragement to embark upon a second ‘follow-on’ edition. The new book features 306 new firearms: rifles, carbines and handguns used by both sides, the Boers as well as British and Colonial soldiers.

The hard covered book contains over 1,400 images (most of which are in colour) of carved and engraved weapons. In addition there are a further 25 farm maps, official forms and letters etc. There is also a selection of swords, bayonets, bandoliers, ammunition, medals, a large variety of unit badges and headgear worn by both sides. Included are two new chapters covering Anglo-Boer War re-enactor groups (in six countries) and Anglo-Boer war trench-art and carvings. (such as pipes and mementos carved in Boer POW camps.)

The service histories of Boers and soldiers are researched along with many previously unpublished original photos of groups of Boers and soldiers. Amongst the Boer weapons are four carved rifles that were used by famous Boer Generals. Also featured are 70 weapons that were used or souvenired by British and Colonial officers and troops (British, Canadians, Australians, South Africans and New Zealanders). This book is guaranteed to be of interest to a wide variety of collectors and military historians. The book is A4 size, hard cover and has 349 pages.